May 7, 2018May 25, 2018 Movers Who Blog Hiring Professional Movers, Moving, Organizing, Our People, TWO MEN AND A TRUCK, Uncategorized

TWO MEN AND A TRUCK® reaches another milestone achievement: its 7 millionth move 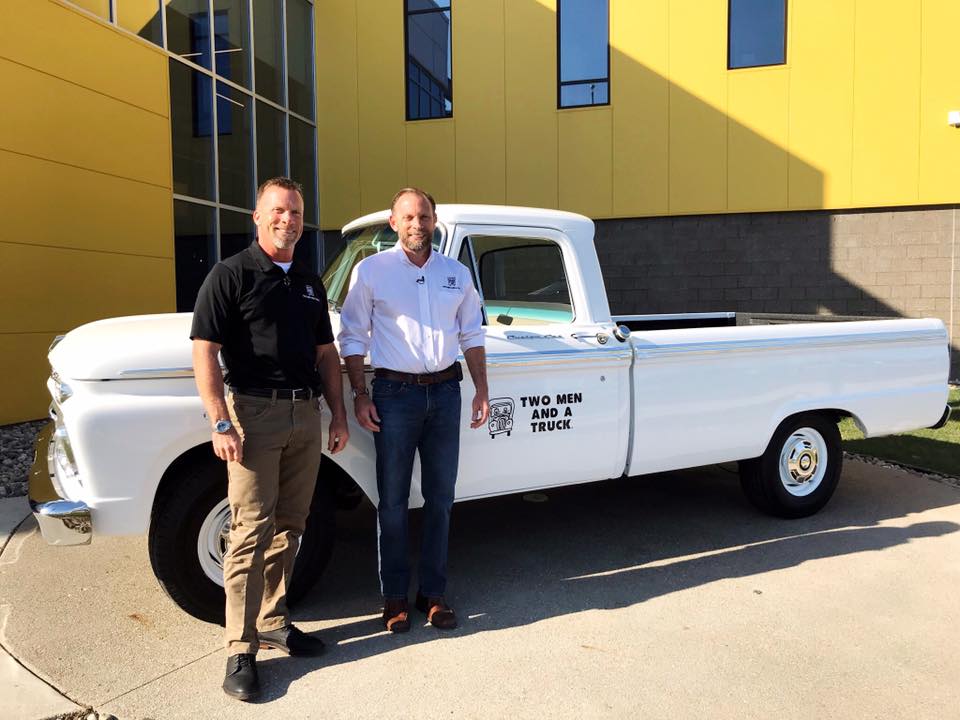 One 1966 Ford pickup truck, a creative mother, and two high school brothers who were looking to make a few extra spending dollars during the summertime.

This was the recipe that led to the formation of the international moving company now known as TWO MEN AND A TRUCK®, and since the official first move was completed in 1985, the journey has been a long, winding road – a road leading to the brand officially completing its seven millionth move last week.

Along its journey, the company has seen its ups and downs, numerous new ideas, rapid expansion across the United States and internationally, and a growing and dedicated team of employees. But most importantly, one thing has remained the same.

“Technology has brought so much change to how we have done business,” said Brig Sorber, co-CEO and one of the original stickmen. “One thing that has not changed and that still holds supreme is that first interaction our customers have with our CSRs and movers – that remains constant. My brother Jon and I radiated care, empathy, and confidence. Our frontline staff continues these qualities, and hardware, software, and technology can never replace that. The human touch can never be replaced.”

For Sorber – who began working with his mother, Founder Mary Ellen Sheets, when the company started – it has been interesting to reflect on the path of TWO MEN AND A TRUCK. As it has grown into an international brand and made an impact on communities worldwide, he’s realized you never stop learning as a leader.

He’s continuing to learn even to this day, and despite all the success, keeps that competitive edge to continue moving forward.

“You never stop learning with this. Teachers when I was younger would say, ‘you will never stop learning,’” Sorber said. “Well, they were right. In business and your professional career, if you aren’t growing, you are dying. We as individuals and businesses need to learn, evolve, and grow, or we diminish. God made us in His image, he built us for adventure. TWO MEN AND A TRUCK continues to evolve and change, even after 10-straight years of month-over-month growth. We will never stop – it’s a choice we make every day.”

From the very first move to the seven millionth, TWO MEN AND A TRUCK has been able to open locations in 43 U.S. states and also in Canada, Ireland, and the United Kingdom. We have made major strides to be involved in as many charitable campaigns as possible, even starting our own branded campaign, such as the national Movers for Moms® program.

We’ve reached 100 months of consecutive growth to-date, and completed moves of just about every variety. More important than all of that, though, is the impact the brand name has made in so many different lives.

“Many people have made their careers here or used TWO MEN AND A TRUCK as a stepping stone to get the career they wanted, and I am so proud of both,” Sorber said. “Our employees are not equipment to be used and discarded. We have a responsibility to take care of them, and we as group have made an environment conducive to learning and growth. It comes down to each individual investing the time into learning and growing while taking the time to build their careers. We make a TWO MEN AND A TRUCK path of success for our employees, and most of them take it.”

For some of the original franchisees of the TWO MEN AND A TRUCK system – the ones who started early in the formation of the company and who have built exceptional frontline teams to help the brand succeed – it’s been rewarding to reflect on the journey and where the company has come from.

“The achievement means a lot to me, because if I am going to be honest, in the beginning I didn’t think TWO MEN AND A TRUCK would ever get this big,” said Eric St. Pierre, co-franchisee for the TWO MEN AND A TRUCK Colorado Springs, Colo., location that opened in 1993. “I was trying to work for myself and make a decent living. To see the brand grow this much and have the reputation that we have earned nationwide is amazing. It makes me proud that we have been a part of that. Being a company that has performed seven million moves means that if TWO MEN AND A TRUCK went away today, people would still remember us 50 years down the road.”

For longtime Franchisee Cindy Tometich – who opened the Des Moines, Iowa location in 1996 with her husband John – it’s the ability to still provide that local feel the Sorbers started in 1985 while we continue operating on an international scale.

“There are certainly many customers who are aware of the fact that it’s not just two men and a truck anymore,” Tometich said. “Many have seen our trucks everywhere, and have seen us on the news. We feel even as we have grown, what our customers are most focused on is still their specific move, and how we can help. They feel like they know and trust us.”

To all of the outstanding frontline employees who have put in the tough work over the years, the managerial teams and franchisees who have helped organize their franchises, and most importantly the customers who have kept us going – TWO MEN AND A TRUCK thanks you! Without each and every individual who played their part in this journey, seven million moves would not be obtainable.

To check out some of the history of the brand, watch the video below!

4 thoughts on “TWO MEN AND A TRUCK® reaches another milestone achievement: its 7 millionth move”