From mover to marketer in a matter of months

Moving People Forward® is our core purpose. We make it a priority each and every day to move people forward, both personally and professionally. So much so, that 75 percent of our managers started in frontline positions before moving into management roles! 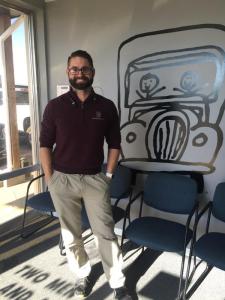 Like many employees within our system, TWO MEN AND A TRUCK® Fort Wayne, Ind., Marketing Coordinator Dirk Knowles has experienced this firsthand.

After attending high school in Bluffton, Ind., Knowles went on to attend the University of Saint Francis in Fort Wayne to pursue his Bachelor’s degree in Business Administration with a concentration in marketing.

Although Knowles had known about TWO MEN AND A TRUCK® since 2008, it wasn’t until August 2012 that he joined the company as a mover. Two months later, he was offered a position in the office as a customer service representative (CSR). TWO MEN AND A TRUCK® Franchisee Matt Schiffeneder took notice of Knowles’ potential and knew of his knowledge in marketing. After two months of working as a CSR, Schiffeneder presented him the opportunity to further advance his career and take on the role of marketing coordinator at the franchise. Knowles jumped at the opportunity.

This coming spring, Knowles will have the chance to do just that as he coordinates the Movers for Moms® campaign in his community. The program is held at all TWO MEN AND A TRUCK® locations across the country to collect donations for essential care items to be delivered to women’s and family shelters on Mother’s Day. He and his team have already gained the support of six Fort Wayne businesses who will be donation partners throughout the program.

As he plans for this large campaign and tackles day-to-day duties, Knowles feels supported by the corporate office and resources available to him.

“My favorite part about the TWO MEN AND A TRUCK® system is how open the line of communication between home office and the franchise is,” said Knowles. “Being very new to the position and being my first opportunity to focus on the marketing aspect of a company, it is reassuring to know that when I have a question I can contact home office directly and speak with someone who has the experience and knowledge.”

While he continues to excel and grow within the company, Knowles encourages others considering beginning careers with TWO MEN AND A TRUCK® to take the leap.

“Having experience as a mover significantly helped me when working as a CSR when explaining to customers how and what our movers would do. Now having worked as both a mover and CSR, it helps when explaining the moving process starting with that first initial customer call to the signing of the paperwork at the end of the move,” said Knowles. “My advice for anyone thinking about starting a career with TWO MEN AND A TRUCK® would be to take every opportunity you are given and to work in different positions within the company.”