“We’ve learned … that the soft stuff and the hard stuff are becoming increasingly intertwined. A company’s values – what it stands for, what its people believe in – are crucial to its competitive success. Indeed, values drive the business.”   -Robert Haas, Chairman & CEO of Levi Strauss & Company

Today we’re seeing more and more companies draft their own set of core values by which they follow and run their operations. Here at TWO MEN AND A TRUCK® the core values aren’t just hung on the office walls, rather they are lived by each team member day in and day out.

Below are just a few great examples of how our franchises nationwide bring these values to life.

Giving back to the community

Giving back to the community is such a large part of who we are as a company, and our franchises never hesitate to lend a helping hand. We saw this especially last year when Oklahoma City was struck by a tragic tornado. Within a few hours, our TWO MEN AND A TRUCK® Oklahoma City franchise was out in their community assisting with disaster relief efforts utilizing movers and trucks to transport supplies to the devastated area.

THE GRANDMA RULE®: To treat everyone the way you would want your Grandma to be treated.

This rule was inspired by our company’s first grandma, Grandma Eb, who played an integral role in the early days of the company. There have been many remarkably heartwarming illustrations in which the GRANDMA RULE® was invoked, where TWO MEN AND A TRUCK® team members went above and beyond their duties as movers to minimize the impact the moving experience with their customers. Here’s one of our favorites:

A TWO MEN AND A TRUCK® team moved an elderly woman with cancer who had recently lost her husband. Her moving team sensed something when they observed the woman sitting among her boxes in her new home on the verge of tears as she considered the daunting prospect of unpacking. After completing the move and returning to the office, the lead mover asked permission to go back on his own time to unpack her belongings. Another mover who just returned from another job overheard the situation and immediately volunteered his time as well. After the move and unpack, the customer sent the following letter to the franchise operator:

I am writing this letter to tell you of two of your outstanding employees, Eric S. and Chris M. I moved from Florida back to Delaware and was sitting here in the middle of boxes to be unpacked. Your employees who had moved some furniture locally for me saw my frustration about unpacking and came back after the move and helped me unpack and dispose of the empty boxes by carrying them four flights down to the dumpster. These young men were a wonderful help to me since I have a prosthesis on my left leg and do not move easily. I hope you will give them a commendation of some kind, since I feel they are very unusual, kind men who wanted nothing more than to help me.

Care: To have compassion for family, customers, co-workers, and community.

Care is essential to the TWO MEN AND A TRUCK® system. It’s the foundation of what we do every day. It’s so important we decided to include it in our tagline, “Movers Who Care®”. 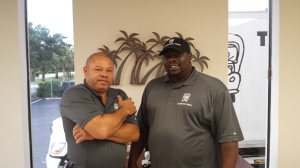 “Two Palm Beach movers, Pedro A. and Carl P., were on an overnight, long distance move to Tallahassee in Northern Florida. They were pulling off the highway for the evening during a powerful rainstorm when they noticed an SUV had gone off the road and landed in a ditch filled with water. They ran over, waded into the thigh-deep water, and pulled the family (husband, wife, and two children) from the vehicle. Fortunately, there were no serious injuries, so they waited until the authorities arrived, then continued on their way.”

Be your best and have fun: To be the best professionally and personally while enjoying life and having fun.

We couldn’t think of a better example for this core value than a boy’s first moving experience. Cade, the six-year-old boy who was the inspiration of our national commercial last year, was very nervous about moving from his life-long home in Atlanta. The movers took notice and to help ease his worries, and they named him “Boss for a Day.” As boss, Cade was able to have a role in the moving process, make a connection with the movers, and observe the movers taking care of his favorite belongings. The movers truly made Cade and his family’s moving experience stress-free and fun. Watch this video to learn more about Cade and his family’s moving experience.

Inclusion: To welcome people from all backgrounds in the workplace and the community.

Fatima Kacapor spent time at TWO MEN AND A TRUCK®/INTERNATIONAL, Inc. during the summer of 2013 to shadow and observe work culture in the United Sates. Fatima is a college student from the southeastern European country, Bosnia, studying communications. She is part of the Jericho Foundation, an international non-profit organization dedicated to restoring HOPE (healthcare, opportunity, personal relations, and education) in Bosnia and Herzegovina (BiH). Fatima wrote a blog post detailing her positive experience while shadowing at TWO MEN AND A TRUCK® International, Inc. Her experienced left her feeling that TWO MEN AND A TRUCK® was indeed a company who put inclusion at the forefront of its culture.

Integrity: To always conduct oneself with honesty and fairness.

We take pride in how our company is committed to living lives full of integrity. Team members from our corporate office in Lansing to those in our nearly 300 locations throughout the U.S., Canada, Ireland and U.K., we understand what it means to be part of a company which celebrates commitment and follow-through. These are the cornerstones of integrity, and our principles are emphasized and upheld in every aspect of our business. We treat people with respect.

This core value is demonstrated daily throughout our company and we strive to exceed our customers’ expectations each and every time we perform a move. Many of our mover dispatch areas feature a poster which declares, “Prove it every move.” And we do! That’s why we’re very proud of our 96 percent customer referral rate.